This notebook is part of The Climate Laboratory by Brian E. J. Rose, University at Albany.

We will call this abrupt decrease in OLR the radiative forcing, a positive number in W m\(^{-2}\)

\(\Delta R\) is a measure of the rate at which energy begins to accumulate in the climate system after an abrupt increase in greenhouse gases, but before any change in climate (i.e. temperature).

Let’s use our simple zero-dimensional EBM to calculate the resulting change in equilibrium temperature.

How much warming will we get once the climate system has adjusted to the radiative forcing?

First note that at equilibrium we must have

and in our very simple model, there is no change in ASR, so

(with standing for final.)

From this we infer that

The new equilibrium will have exactly the same OLR as the old equilibrium, but a different surface temperature.

The climate system must warm up by a certain amount to get the OLR back up to its original value! The question is, how much warming is necessary? In other words, what is the new equilibrium temperature?

The global mean surface warming necessary to balance the planetary energy budget after a doubling of atmospheric CO\(_2\).

The temperature must increase so that the increase in OLR is exactly equal to the radiative forcing:

where we are writing the change in temperature as

(and the subscript zero will remind us that this is the response in the simplest model, in the absence of any feedbacks)

To achieve energy balance, the planet must warm up by

So our model without feedback gives a prediction for climate sensitivity:

Question: what are the current best estimates for the actual warming (including all feedbacks) in response to a doubling of CO\(_2\)?

We’ll now look at the feedback concept. Climate feedbacks tend to amplify the response to increased CO\(_2\). But \(\Delta T_0\) is a meaningful climate sensitivity in the absence of feedback.

\(\Delta T_0 = 1.2\) K is the warming that we would have if the Earth radiated the excess energy away to space as a blackbody, and with no change in the planetary albedo.

A concept borrowed from electrical engineering. You have all heard or used the term before, but we’ll try take a more precise approach today.

A feedback occurs when a portion of the output from the action of a system is added to the input and subsequently alters the output:

The result of a loop system can either be amplification or dampening of the process, depending on the sign of the gain in the loop, which we will denote \(f\).

We can think of the “process” here as the entire climate system, which contains many examples of both positive and negative feedback.

The capacity of the atmosphere to hold water vapor (saturation specific humidity) increases exponentially with temperature. Warming is thus accompanied by moistening (more water vapor), which leads to more warming due to the enhanced water vapor greenhouse effect.

Colder temperatures lead to expansion of the areas covered by ice and snow, which tend to be more reflective than water and vegetation. This causes a reduction in the absorbed solar radiation, which leads to more cooling.

Make sure it’s clear that the sign of the feedback is the same whether we are talking about warming or cooling.

We start with an initial radiative forcing , and get a response

Now consider what happens in the presence of a feedback process. For a concrete example, let’s take the water vapor feedback. For every degree of warming, there is an additional increase in the greenhouse effect, and thus additional energy added to the system.

Let’s denote this extra energy as

where \(f\) is the feedback amount, a number that represents what fraction of the output gets added back to the input. \(f\) must be between \(-\infty\) and +1.

For the example of the water vapor feedback, \(f\) is positive (between 0 and +1) – the process adds extra energy to the original radiative forcing.

The amount of energy in the full “input” is now

But now we need to consider the next loop. A fraction \(f\) of the additional energy is also added to the input, giving us

and we can go round and round, leading to the infinite series

It so happens that this infinite series has an exact solution

This is also sometimes written as

is called the system gain – the ratio of the actual warming (including all feedbacks) to the warming we would have in the absence of feedbacks.

And if the overall feedback is negative?

ECS is an important number. A major goal of climate modeling is to provide better estimates of ECS and its uncertainty.

Latest IPCC report AR5 gives a likely range of 1.5 to 4.5 K. (There is lots of uncertainty in these numbers – we will definitely come back to this question)

So our simple estimate of the no-feedback change \(\Delta T_0\) is apparently underestimating climate sensitivity.

Saying the same thing another way: the overall net climate feedback is positive, amplifying the response, and the system gain \(g>1\).

The actual warming is substantially amplified!

There are lots of reasons for this, but the water vapor feedback is probably the most important.

The overall feedback (due to water vapor, clouds, etc.) is positive.

Now what if we have several individual feedback processes occurring simultaneously?

Each individual process takes a fraction \(f_i\) of the output and adds to the input. So the feedback amounts are additive,

This gives us a way to compare the importance of individual feedback processes!

The climate sensitivity is now

With this choice of sign conventions, \(\lambda_i > 0\) for a positive feedback process.

Based on our earlier numbers, the net feedback necessary to get a climate sensitivity of 3 K is

We might decompose this net climate feedback into, for example

Every climate model has a Planck feedback#

The “Planck feedback” represented by the negative of our reference parameter \(-\lambda_0\) is not really a feedback at all.

It is the most basic and universal climate process, and is present in every climate model. It is simply an expression of the fact that a warm planet radiates more to space than a cold planet.

As we will see, our estimate of \(-\lambda_0 = -3.3 ~\text{W} ~\text{m}^{-2} ~\text{K}^{-1} \) is essentially the same as the Planck feedback diagnosed from complex GCMs. Unlike our simple zero-dimensional EBM, however, most other climate models (and the real climate system) have other radiative feedback processes, such that

Data from the IPCC AR5#

This figure is reproduced from the recent IPCC AR5 report. It shows the feedbacks diagnosed from the various models that contributed to the assessment.

See below for complete citation information. 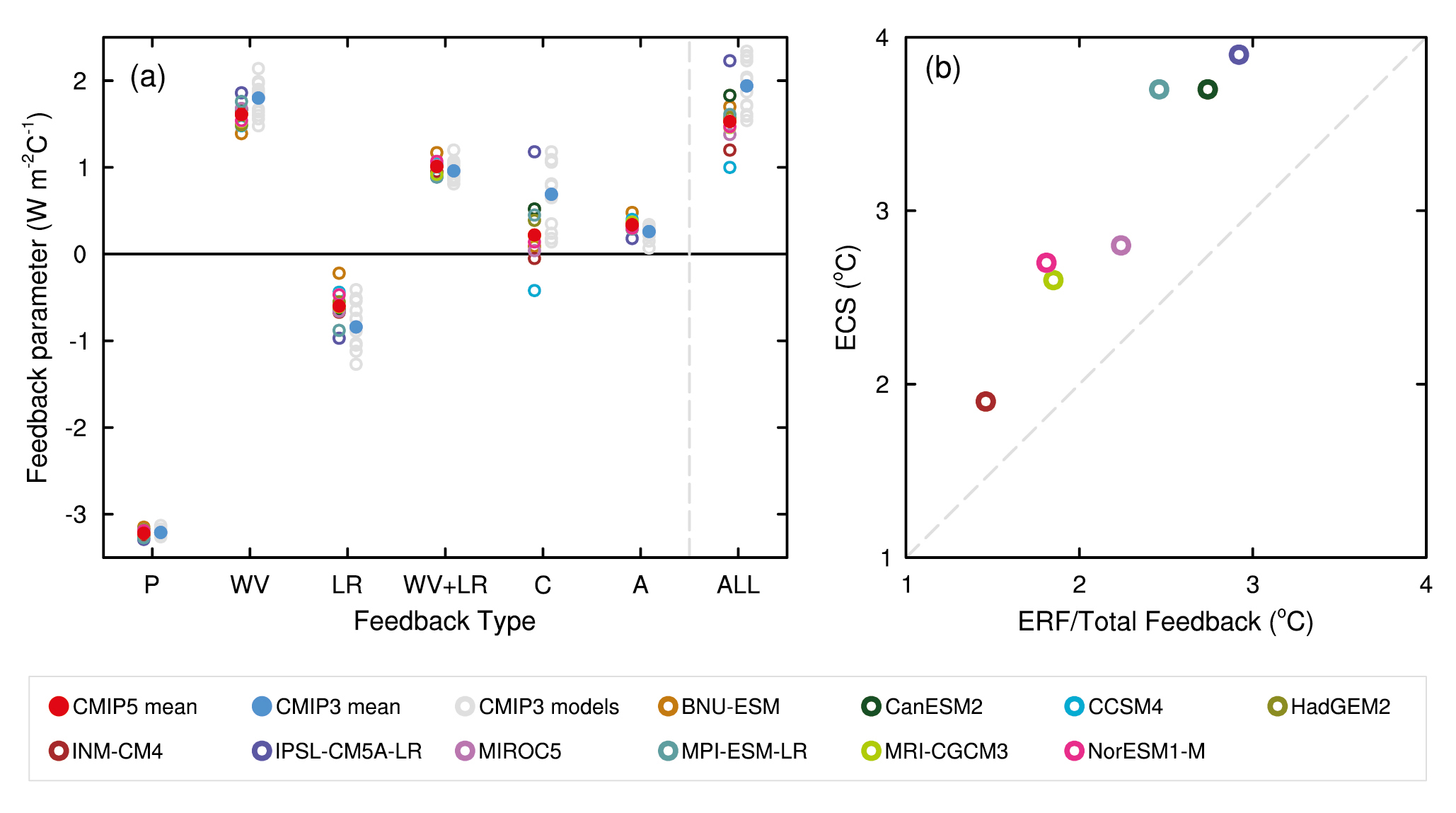 This is Figure 9.43 from Chapter 9 of the IPCC AR5 Working Group 1 report.

The report and images can be found online at https://www.ipcc.ch/report/ar5/wg1/

The full citation is:

8. The zero-dimensional model with variable albedo#

In homework you will be asked to include a new process in the zero-dimensional EBM: a temperature-dependent albedo.

We use the following formula:

For intermediate temperature, this formula gives a smooth variation in albedo with global mean temperature. It is tuned to reproduce the observed albedo \(\alpha = 0.299\) for \(T = 288\) K.

Coding up the model in Python#

This largely repeats what I asked you to do in your homework.

Numerical solution to get the three equilibrium temperatures#

Using numerical timestepping and different initial temperatures, can you get the model to converge on all three equilibria, or only some of them?

What do you think this means?

This notebook is part of The Climate Laboratory, an open-source textbook developed and maintained by Brian E. J. Rose, University at Albany.

It is licensed for free and open consumption under the Creative Commons Attribution 4.0 International (CC BY 4.0) license.